Comscore reports that 62 percent of American adults now carry smartphones (Nielsen says it’s 64 percent). The firm’s latest smartphone tracking data show that the iPhone remains the top single smartphone, while Android retains its OS crown though it appears to have peaked in the US.

While Android’s market share is down slightly Samsung’s is up. September data show Android with 51.8 percent of the smartphone market to Apple’s 40.6 percent. Microsoft also gained slightly, perhaps at Android’s expense, as the clear “third platform” now. 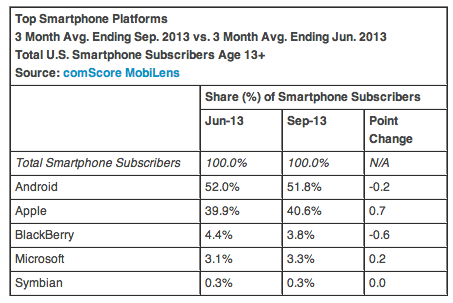 The iPhone 5s was announced on September 10 and went on sale September 20. Thus it’s not clear how many of those handset sales are reflected in these figures. My guess is that October will see another iPhone bump.

Among smartphone makers, as mentioned, only Apple and Samsung saw growth. Others were flat or down. HTC in particular is expected to have a terrible Q4 and is really in trouble because it’s losing so badly to Samsung in the Android arena. 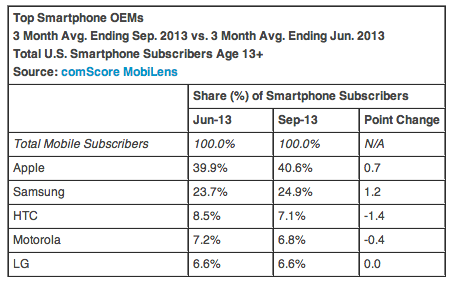 Shifting to app and mobile web usage, comScore found that Google sites collectively had the greatest reach, followed by Facebook which also had the single most popular app. Yahoo surprisingly was third in terms of overall mobile reach; however only its weather and finance apps were in the top 15.

Interestingly Apple Maps is not very far behind Google Maps, at 11 and 8 respectively. This represents a drop of one position for Apple Maps and three places for Google Maps vs. last month. 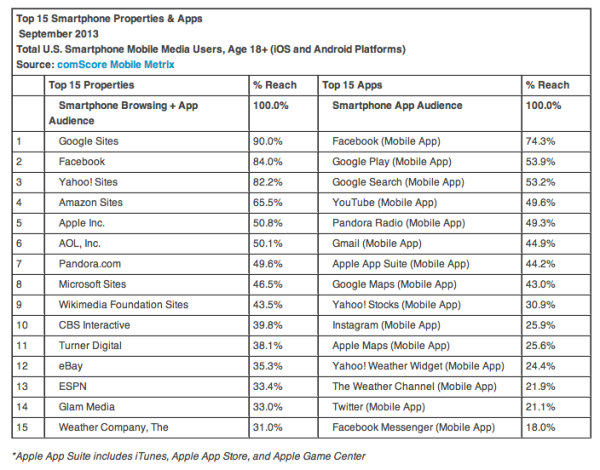