Data from Google and Chitika show that, despite improvements, the Android ecosystem is still more fragmented than iOS. Android 4.1 (Jelly Bean) and its younger sibling, KitKat, combine for just under 56 percent of all Android devices in the market. However KitKit is on just 1.1 percent of Android devices.

Jelly Bean is thus the single most common version of Android in the market. In contrast, roughly 90 percent of Apple device users are on iOS 6 or 7, and roughly three-fourths (74.1 percent) on iOS7. 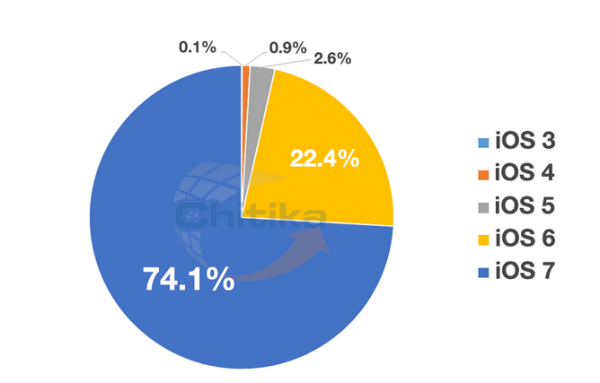 What’s interesting is that nearly a quarter (24.1 percent) of Android users are still on Gingerbread (2.3). There has got to be some pent-up demand for the improvements of later versions of Android among these people.

It would be interesting to know the geographic distribution of these different versions of Android. I believe the data are global. By comparison the iOS data from Chitika only cover North America.

StatCounter reports that on a global basis Android devices are responsible for 37 percent of traffic, while iOS is driving 33 percent. In North America the traffic numbers look like this (smartphones + tablets):