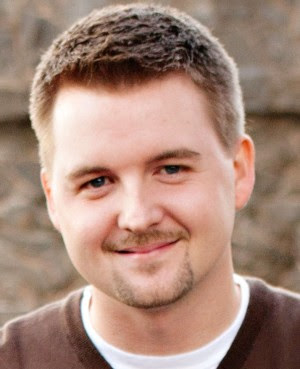 Without missing a beat, and working from home rather than out of some fancy “social media war room,” Martin composed the tweet that would snowball into Arby’s biggest ever social media win to date.

“When I saw so many people mentioning us in relation to the hat, I thought it was a great opportunity to jump into the conversation,” said Martin, who was gracious enough to take an interview from his snowbound home in Atlanta.

His tweet to @Pharrell has earned more than 83,000 retweets and has been favorited over 48,000 times. Martin says it has garnered 10,700 replies and helped the brand win 6,000 new Twitter followers.

Martin said the tweet turned into a “perfect storm” with it being posted early in the show. As Pharrell kept taking the stage wearing the unique hat, winning more and more awards, the Arby’s tweet continued to build momentum.

Hey @Pharrell, can we have our hat back? #GRAMMYs

Not only did it receive replies from other brands including Quaker Oats, Pepsi and Hyundai, Pharrell Williams, who has more than 2.7 million Twitter followers, replied as well – a huge win for any brand trying to engage a celebrity on the social media platform. 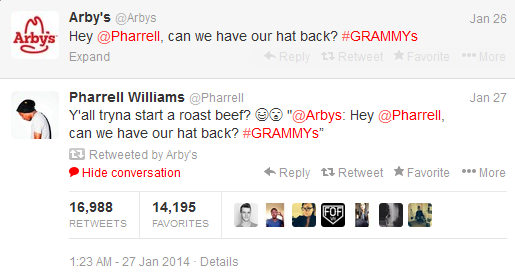 Since Pharrell’s reply, Martin said internal discussions have occurred around how to extend the buzz from the Twitter exchange, and that Arby’s has reached out to the Grammy winner about using his hat in future promotions.

Arby’s social media strategy has come a long way since Martin joined the team in 2010. Before Martin came on board, the brand had no social media department.

“Our CMO has created an environment for our team to have freedom and flexibility,” said Martin, “I’m not going to put the brand in jeopardy. If I do think it’s controversial, I run it up the flagpole.” He claims the free range he has gained comes from building trust with his supervisors over time.

Martin is responsible for all of Arby’s tweets during big media events, like the Grammy’s and next Sunday’s Super Bowl. “We don’t try to force it,” said Martin in regards to Arby’s social content strategy. Martin shared that he had other posts planned for the Grammys, but pulled back after his tweet to Pharrell took off. “It was a great real-time moment.”

“For me, social really starts by listening to our customers and what people are saying about our brand,” said Martin. “We are constantly monitoring our brand terms, and taking social insights to other teams like product development, PR and customer service.”

While Martin will be hard-pressed to recreate what happened during the Grammys, a lot more people will be paying attention to Arby’s tweets Super Bowl Sunday.