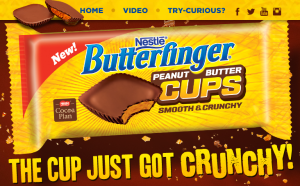 The Super Bowl ad frenzy has already started, with many brands like Jaguar posting “teaser” ads in anticipation of their monumental Super Bowl advertising investments. Nestle is another brand to get in on the pre-game action, releasing a campaign for its new Butterfinger Peanut Butter Cups candy.

Nestle posted its “Butterfinger Cups 2014 Big Game Ad Teaser” video on YouTube yesterday, as well as using the video on the ButterfingerCups.com site to promote its latest product.

Starting with the line, “The relationship between Chocolate and Peanut Butter is about to change,” the video uses a couples therapy theme – with a husband representing peanut butter and a wife representing chocolate – to push Nestle’s Butterfinger Peanut Butter Cups.

From the “Try-Curious” magazine article the couple is reading, to the framed cherry and banana prints on the office wall and a cheese and crackers couple carrying an extra large pretzel stick, there is no lack of sexual innuendo in the ad.

The video and website both promote the hashtag #CupsTherapy, playing on the couples therapy theme, and include links to Facebook, Twitter and Instragram pages for the new candy. The website also includes a call-out, encouraging viewers to, “Watch Our Ad During the Big Game! 02.02.2014.”

According to an AP report on Yahoo Finance, Butterfinger Peanut Butter Cups is Nestle’s first new product in five years, and has been tasked with the goal of taking market share from industry leader Reese’s Peanut Butter Cups.

The AP article claims Nestle has no plans to release its first-ever Superbowl ad before the game, but says it will continue the couples therapy story line used in the teaser ad.

The Super Bowl – and all the Super Bowl ads – will air February 2 on Fox with kick-off scheduled for 6:25 p.m. EST.