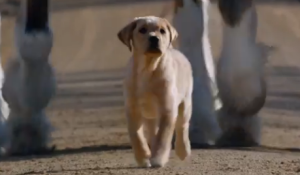 According to Unruly’s data, Budweiser’s heartwarming ad, featuring a friendship between a puppy and a Clydesdale horse, is already the sixth most shared Super Bowl ad of all time, and has helped the the brand overtake Volkswagen as the most shared online Super Bowl brand ever.

In the US, “Puppy Love” appeared on national television channels 75 times prior to the game and on local broadcasts 1,200 times which is nearly four times the next most popular ad, Volkswagen’s “Wing’s” commercial.

Released four days prior to the Super Bowl, “Puppy Love” marks the second year in a row Budweiser has ranked No. 1 for most shared Super Bowl ads by Unruly. Last year, the brand’s “Brotherhood” spot earned 1.5 millions shares from the time it was released until the day after the game.

“Puppy Love” was also named this year’s most popular Super Bowl ad by iSpot.tv which ranked ads based on a culmination of data, including social actions, online views and search activity.

5. Bud Light “Ian Up for Whatever”

9. Toyota “The Muppets with Terry Crews”