How Twitter Plans To Fix Its User Growth Problem 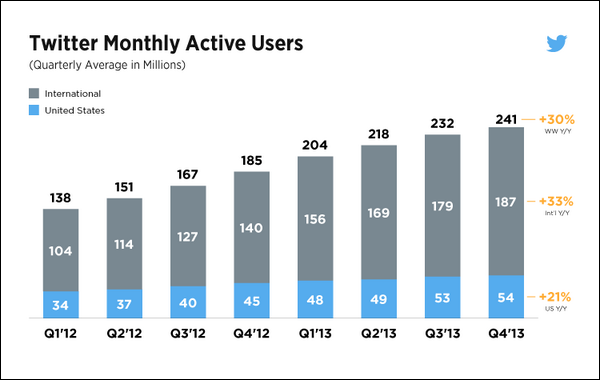 Twitter’s monthly active userbase (MAU) reached 241 million at the end of Q4, but that’s only an increase of nine million users during the quarter. It’s the smallest quarterly increase in MAUs over the past two calendar years. In the US, Twitter added only a million new users during Q4. And the market is punishing the company over the slow user growth, with the stock down about 18 percent in after-hours trading as I type.

CEO Dick Costolo knows the company has a user growth problem, and on today’s earnings call he promised that Twitter will be “doubling down in 2014″ to fix it. He was quite frank — more revealing than most CEOs are on earnings calls — about some of the company’s specific plans to grow its user base:

Costolo said no single change will boost user numbers, but he believes “a combination of changes over the year … will start to change the slope of the growth curve.”

He made an important admission when he promised that Twitter is also planning “other methods to re-engage inactive users.” The company knows that turning around its slowdown in active users isn’t just about getting new people signed up, but also about bringing back the millions that tried Twitter, didn’t like it or “get it,” and left.

Another alarming stat is the Q4 decline of “timeline views” — one of Twitter’s primary data points for showing value to advertisers. That number dropped from 159 billion in Q3 to 148 billion in Q4 of last year — the only quarterly decline in the past two calendar years. 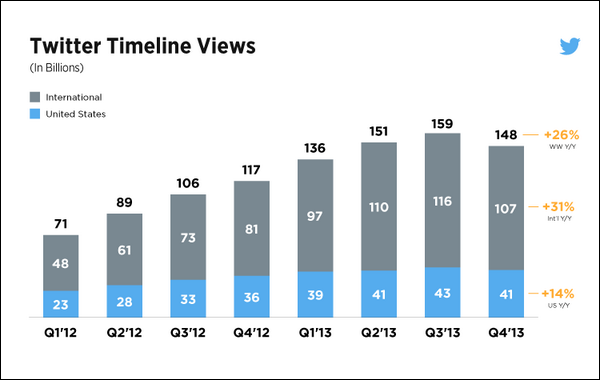 But Costolo put a positive spin on that chart, saying that some of Twitter’s recent feature additions and user interface changes led to the decline and simultaneously improved overall timeline interactions.

“Interactions per timeline view are up,” he said. “Users are interacting with their timeline more than ever before, which is good for users, advertisers and the company.”

As an example, Costolo cited the new threaded conversation view that shows a tweet and its replies in order. He said that change helped new users grasp the conversational nature of Twitter but cut down on timeline views because there was no need to click back and forth to see each tweet in the conversation. As another example of improved interactions, Costolo said that favorites and retweets are up about 35 percent since Twitter began showing photos and video in the timeline without requiring an extra click.

As for 2014, Costolo says Twitter believes that the planned changes “will lead to higher user growth and engagement over time.