According to the study findings, while six to ten word subject lines delivered the highest open rate, email subject lines with five or fewer words generated a 16 percent open rate.

Retention Science claimed 52 percent of the emails the company evaluated had subject lines with eleven to fifteen words, dropping open rates to 14 percent.

Email Open Rate by Number of Words in Subject Line 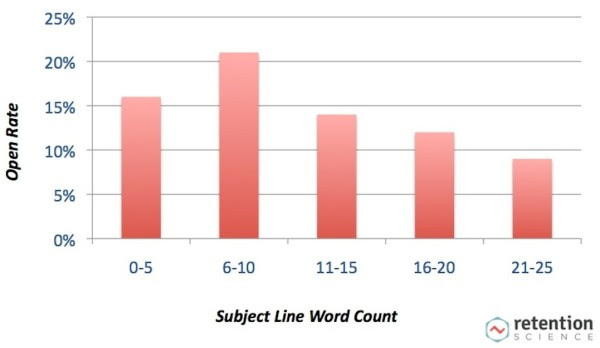 While some studies have reported email marketing mobile open rates as high as 65 percent, Retention Science said 35 percent of the emails in its study were opened on a mobile device, reinforcing the importance of keeping subject lines short:

Given that most smartphones only display five or six words of a subject line, being brief and concise is even more critical in the mobile marketing world.

To help increase open rates, Retention Science recommends using a person’s name in the subject line, or a movie title or song lyric.

“Movie and music references can be targeted to certain customer segments or encapsulate a promotional theme, making them a creative way to hyper-target and capture attention,” says Retention Science CEO Jerry Jao.

Retention Science is scheduled to publish its finding on March 4.