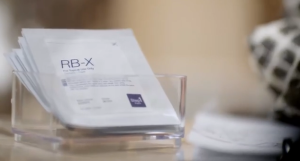 Hoping to catch the viral success of its original “Beauty Sketches” campaign, Dove has launched a new “Patches” ad built on the premise that women’s self esteem issues are all in our head.

In the new ad, “Psychologist and distinguished scholar at Columbia University” conducts a research project, inviting women to use the “revolutionary” RB-X patch, developed to “Enhance the way women perceive their own beauty.”

The research participants are asked to apply the patch and keep a video diary, logging how they feel about themselves from day to day. The ad includes clips of the participants saying, at first, they don’t feel a change, but then over the course of 10-days feeling more confidant. One woman tells the camera, “I feel beautiful no matter if I’m sick, tired, or the fact there’s a pimple on my nose.”

What the women don’t learn until the end is that the patch they applied is actually a placebo, a simple sticker with zero medicinal qualities.

There was a sincerity to Dove’s original “Beauty Sketches” campaign, showing how women see themselves versus how others see them, that is lacking here.

To me, this new campaign feels condescending and deceitful, telling women their lack of confidence is all in their head…versus the billions of dollars spent annually on advertising meant to convince women we are not young enough, thin enough, pretty enough, and now, confident enough. (Not to mention Hollywood’s obsession with plastic surgery, and the regular photoshopping of female bodies on the hundreds of magazine covers standing guard at every grocery check-out lane.)

Posted only yesterday, the ad has already earned 1.3 million views and won more than 2,500 shares on Facebook and Twitter. According to AdAge.com, Dove’s new campaign received a simultaneous introduction in 65 countries with, “Paid media support from the get-go.”

Dove’s global senior VP Steve Miles told AdAge, “In terms of market share, the ultimate proof of whether consumers are coming with us, or all of the brand equity measures I look at, we’re on an ascending trend with Dove in almost every region of the world.”

Here’s the full four-minute ad for you to judge if Dove’s latest campaign is more condescending than eye-opening: