In an email from the AdSense policy team, forwarded by the sales team, TechDirt was informed that if AdSense ads weren’t removed from the page within three days the whole account would be shut down. The AdSense policy states, Publishers are not permitted to place Google ads or AdSense for search (AFS) search boxes on pages with adult or mature content.

Here’s the kicker. As Techdirt points out, both of the videos are on YouTube and can be seen with ads served by Google running next to them. An ad was showing up on the Bow Wow video today.

Techdirt appeal, but was rejected because, they were told, “It looks like the video in question is fairly suggestive (ie there is a picture of a stripper pole).”

So what gives? How can Google claim a publisher can’t monetize a page because it contains content which Google itself is monetizing?

It would make somewhat more sense if Google didn’t give advertisers controls over the types of content they want their ads shown next to. But they do.

Right in AdWords advertisers can opt-out of content categories including sexually suggestive content defined as “Provocative pictures, text, and more.” 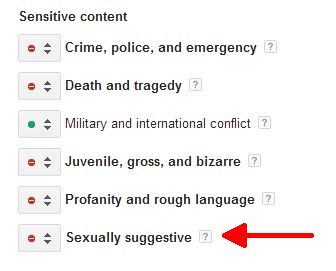 What is the point of offering this option to advertisers if having their ads shown next to sexually suggested content is against the AdSense policy?