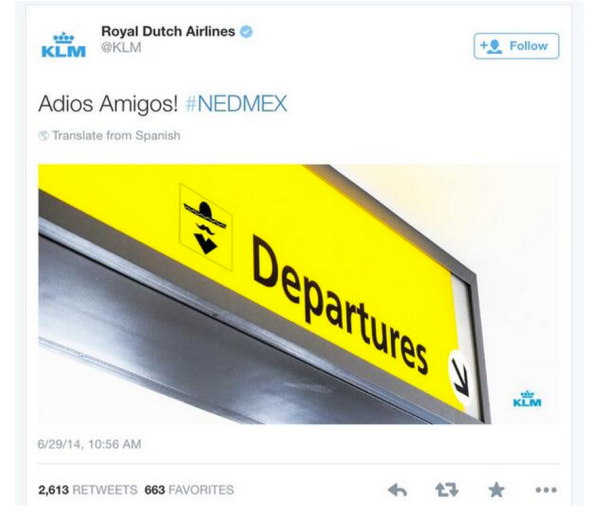 That final point is the most important — first do no harm — and it tripped up Dutch airline KLM in a big way Sunday.

Moments after the Netherlands knocked Mexico out of the World Cup, KLM tweeted “Adios Amigos! #NEDMEX” with a photo of an airport departure sign, photoshopped to include a mustachioed, sombrero-wearing icon.

The reaction on Twitter was instant and overwhelming as fans of the Mexican team still stinging from the controversial loss lashed out, many tweeting outrage that the image was a racist stereotype. KLM deleted the tweet within an hour, but not before it was retweeted nearly 10,000 times, captured in hundreds of screen grabs and lamented in scores of news articles.

One of the strongest reactions came from Mexican actor Gael Garcia Bernal, who tweeted to his 1.94 million followers: “.@KLM I’m never flying your s—-y airline again. F— you big time.” That tweet was also later deleted. But plenty of others still stand. Two examples:

If I'm ever in the Netherlands, I know what company I am NOT flying with. Ahem, @KLM

What happened, @KLM? A few amigos made you feel uncomfortable? Think twice about making fun of a bunch of clients. http://ift.tt/VAN7is

Although KLM apologized for the tweet today — “In the best of sportsmanship, we offer our heartfelt apologies to those who have been offended by the comment,” said Marnix Fruitema, director general of KLM in North America — it’s going to be difficult to undo the damage.

It shouldn’t have to be said that brands should avoid racial stereotypes, even though some have noted that the official FIFA mascots when Mexico hosted the World Cup in 1970 and 1986 both featured sombreros. And as Delta proved with its giraffes in Ghana World Cup tweet earlier this month, brands would be wise to stick with flags when using images to represent countries.

But a more practical lesson from KLM’s experience is to avoid outraging especially passionate fans, especially when their spirit has just been crushed. KLM’s social media team apparent thought it was making a light-hearted joke about an athletic competition. But Mexican fans — like many international futbol fans — treat the game as a religion, so poking fun at that is dangerous territory.

What made it worse in this case was that KLM’s taunting tweet came so soon after a staggering emotional reversal for Mexico’s fans, who were minutes away from celebrating their team’s first knockout stage victory since 1986. It didn’t help that the game was decided by a disputed penalty kick. Mexico’s fans felt robbed, then KLM provoked them with a tweet.

October 31, 2015
How do you get SMS notifications on your mobile phone for important emails in your Gmail? Google doesn’t support text notifications for their email service but Twitter does. If we can figure out a way to connect our Twitter and Gmail accounts, the Gmail notifications can arrive as text on our mobile via Twitter. Let me explain: Twitter allows you to follow any @user via a simple SMS. They provide short codes for all countries ( see list ) and if you text FOLLOW to this shortcode following by the  username, any tweets from that user will arrive in your phone as text notifications. For instance, if you are in the US, you can tweet FOLLOW labnol to  40404 to get my tweets as text messages. Similarly, users in India can text FOLLOW labnol to  9248948837 to get the tweets via SMS. The short code service of Twitter can act as a Gmail SMS notifier. You create a new Twitter account, set the privacy to private and this account will send a tweet when you get a new email in Gmail. Follow thi
Post a comment
Read more

April 07, 2017
There are at least 200 ranking factors in Google’s algorithm (not to mention RankBrain ), which means a thorough SEO audit could lead to dozens, hundreds, or even thousands of SEO tasks. Few companies have the budget or resources to complete every potential SEO to-do item — and doing so would be an incredible waste of time and resources anyway. Some SEO tasks are critical and cannot be ignored; others just aren’t worth your time. Prioritizing an SEO task list is crucial. Focus your resources on SEO work that is actually going to improve rankings, increase clicks and drive revenue. Most companies should focus on engagement SEO work, but technical tasks can’t be ignored completely — especially if you have major problems. [Read the full article on Search Engine Land.] via Marketing Land
1 comment
Read more

December 08, 2016
Instagram may arrived late as a traffic source for brands and publishers, but it’s already showing early signs of success, driving new visitors to their sites and even outperforming its parent company, Facebook. For years brands, publishers and other have tried to push people from the Facebook-owned photo-and-video-sharing app to their sites. Outside of ads and excepting a recent test with some retailers , Instagram didn’t offer much help to companies looking to use it to drive traffic. So they had to find workarounds. They put links in their Instagram bios. They scrawled short-code URLs onto their pictures. And they typed out links in their captions. Then last month Instagram finally introduced an official alternative to these hacky workarounds: the ability for verified profiles to insert links in their Instagram Stories. Almost a month after the launch, 15% to 25% of the people who see a link in an Instagram Story are swiping on it, according to a handful of brands and publishe
Post a comment
Read more