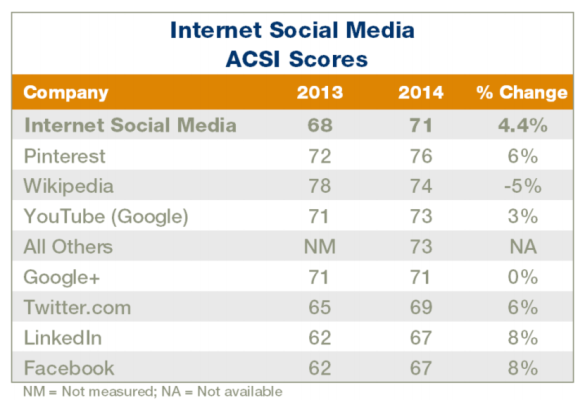 The good: consumer satisfaction with social networks is increasing. The bad: it’s still among the lowest-ranked business categories.

The social media category scored 71 on ACSI’s 100-point scale, up 4.4% over 2013, fourth worst of 43 industries tracked by the survey. Social media surpassed only airlines (69), subscription TV (65) and Internet service providers (63).

“Even with improvements across the board, e-business — and social media in particular — doesn’t do well in terms of user satisfaction,” ACSI chairman and founder Claes Fornell said in a release. “It is rare to see strong growth in an industry with such low customer satisfaction. However, several of the major players seem to have realized that their long-term prospects may be in jeopardy unless they do better.”

And almost all of the social networks showed improvement in the index, which is based on an annual survey of 70,000 U.S. consumers. (Wikipedia, classified by ACSI as a social site, dropped 5% but it doesn’t belong in this discussion).

Pinterest gained a healthy 6% over 2013 and is now the leading social network in the index at 76. YouTube came in at 73 (up 3%), ranking the same as the “all other” social category, which includes Instagram, Reddit and Tumblr. Google+ stayed steady at 71.

Both Facebook and LinkedIn register higher satisfaction this year, but according to their own users, these sites are still the worst in the industry. Facebook gains 8 percent to 67, but the rise in satisfaction precedes the news that the social networking giant manipulated the news feeds of half a million users as part of a psychological experiment. LinkedIn also jumps 8 percent to an ACSI score of 67—the site’s highest to date—but continues to lag all except Facebook. Twitter reaches a new high as well, up 6 percent to 69, as users respond positively to its updated site design and enhanced integration of photos and videos.