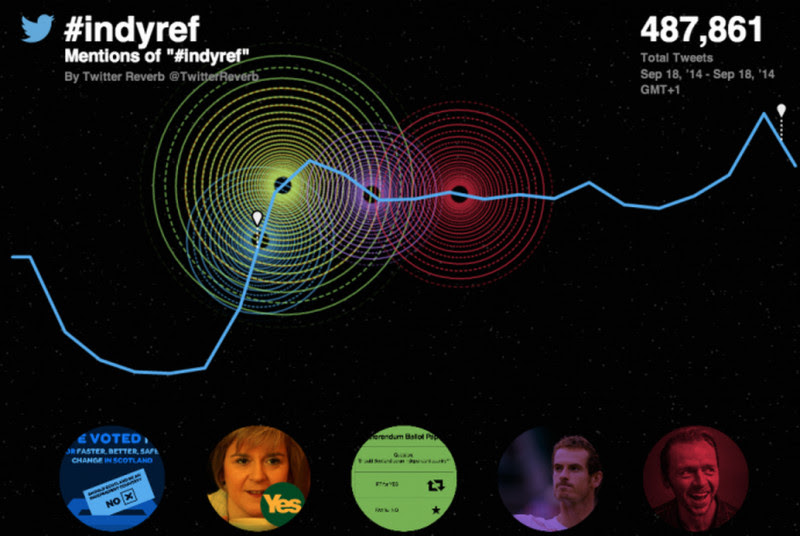 While we’re still waiting for the results Scotland’s vote today on whether to go independent from the United Kingdom, Twitter is out with stats showing that if hashtags were votes, then the pro-independence side would be winning.

Since August 5, the #VoteYes hashtag for pro-independence has been tweeted 1.1 million times, compared to the pro-union hashtag of #BetterTogether getting only 224,000 mentions. That gives #VoteYes a 5-to-1 lead.

Both, however, were left far behind by the overall hashtag of #IndyRef being used 3.75 million times to spread word about the election, regardless of stance. Here’s the top five chart: 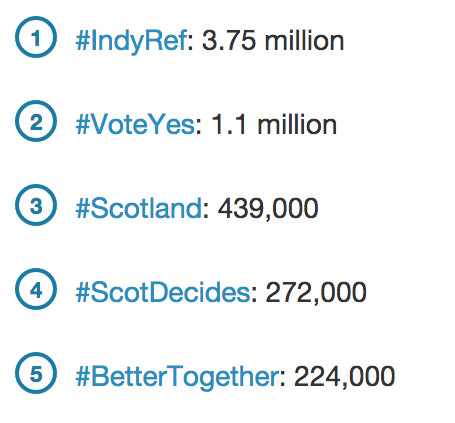 Twitter also added up all tweets that it considered to be in the Yes and No camps, regardless of hashtag used. By that count, Yes is at 1.55 million, No at 500,000, leaving Yes still ahead but by a smaller margin, 3-to-1.

Regular election polling has placed the race in a nearly a dead heat.

Twitter listed some key accounts that have posted gains in the last 24 hours, with @YesScotland leading with a 10% increase, compared to @UK_Together with a 2.7% rise.

Most retweeted on referendum day today was yesterday’s tweet by tennis champion Andy Murray, who is Scottish. He came out in favor of Scottish independence, claiming negativity by the No campaign had swayed him:

Huge day for Scotland today! no campaign negativity last few days totally swayed my view on it. excited to see the outcome. lets do this!