Despite “Do Not Track” Movement, Online Tracking Won’t Go Away [Web Summit] 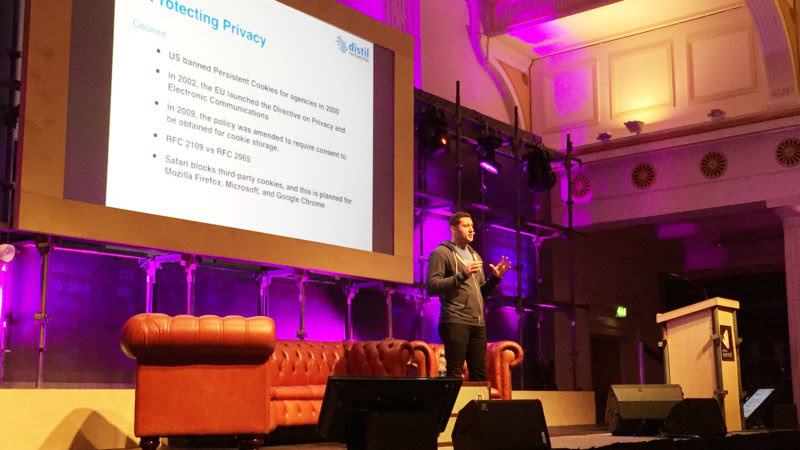 Despite the growing interest in online privacy and the “Do Not Track” movement, one web security CEO says online tracking won’t go away — but it will evolve, and already is.

Rami Essaid, CEO at Distil Networks, discussed the future of privacy and online tracking during a solo presentation today at the Web Summit in Dublin, Ireland.

“Will we ever be completely anonymous?,” Essaid asked. “No, I don’t think [online tracking] is ever going away. Offline, we’re being tracked every day via loyalty cards and credit cards. Online, the technology will evolve.”

And it already has evolved significantly. Essaid gave a brief history of the tools and methods that companies have used to track users online, from cookies and IP addresses to things like HTTP authentication, query string tracking, hidden form fields and more.

All of those technologies are at least a few years old, and Essaid discussed how tracking methods have changed more recently to things like

Essaid told the audience that many companies are moving into behavioral tracking — looking at keystrokes, mouse movements, and so forth, to map behaviors across platforms and devices and tie them together. He said Google, Microsoft and Facebook are already doing this.

The tracking landscape is more difficult on mobile.

He also explained that mobile operators are tagging their users — mobile traffic gets proxied through the carrier, and big carriers like Verizon and AT&T embed headers that uniquely identify the user.

A Call For Transparency

Online tracking has been a subject of great debate. In one recent study, 87 percent of consumers said they don’t want marketers tracking them. Yet, in that same survey, 70 percent said they’d give up personal information in order to save five percent on a purchase.

Marketers and advertisers have long fought against the Do Not Track concept, but in April the Digital Advertising Alliance said it would support an idea called “browser choice” that limits tracking. Many big online companies support Do Not Track, but conventional wisdom is that few consumers actually take advantage of it.

Ultimately, as the battle plays out over data collection and user tracking, Essaid called for better industry transparency.

“We’re never going to stop tracking because there are too many benefits,” he said. “But we need a better understanding of what information is being collected, who’s collecting it and what’s being done with it.”

The post Despite “Do Not Track” Movement, Online Tracking Won’t Go Away [Web Summit] appeared first on Marketing Land.