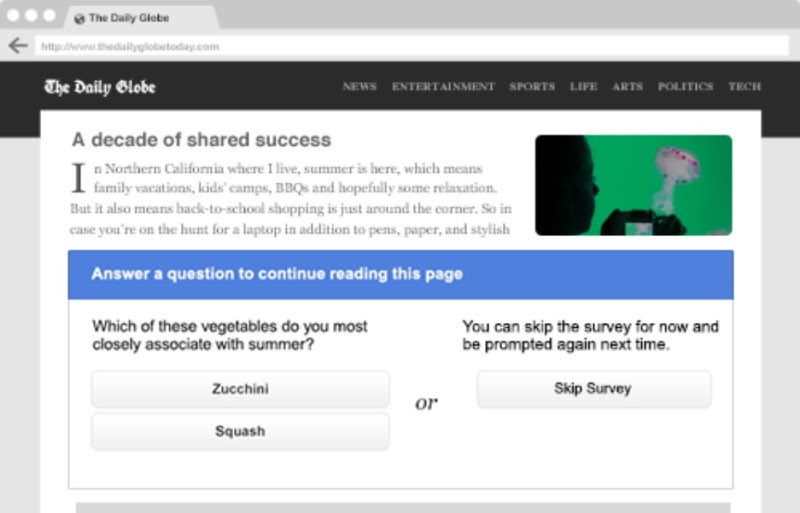 Today, Google opened up its Consumer Surveys program with self sign up available to publishers in the US. Offered as a way for publishers to monetize their content, Google pays publishers for completed surveys, which are typically used as paywall alternatives.

Google will pay publishers $0.05 per question on completed surveys.

Publishers can control how much content to make available and where and how often survey prompts appear on their sites.

The program is open now in the US and will soon be available in the UK and Canada, with roll out to more countries in the coming months. Publishers must have AdSense accounts in good standing in order to enroll in the Consumer Surveys network. Publishers do not have to place AdSense ads on their sites, however.

Publishers need to meet a minimum 10 percent survey completion rate in order to stay in the program.

Companies can use Google Consumer Surveys for market research or to measure onsite user satisfaction, but Google also launches its own surveys on brands and merchants.

The survey data that Google collects on brands and merchants from Consumer Surveys can then appear in AdWords ads in an ad extension called Consumer Ratings. Below is an example of a Consumer Ratings automated extension in an ad from Zulily featuring ratings on prices, service and product quality.

Each rating shown in an ad is based on an average of 1,000 survey answers, says Google.

Google launched the Consumer Surveys platform with select publishers in 2012 and says it is currently used by hundreds of sites.

More information on Consumer Surveys for publishers is available here.