Over in the real world, marketers spend a lot of time and money to make sure their products get great shelf placement.

Startup Mabaya says it is trying to do the same thing for large digital retailers in Europe, Latin America and elsewhere. This week, the Tel Aviv-based company announced it has received $2.25 million in seed funding from Lool Ventures and 2B Angels.

The new money will be used in part to bring its technology to the U.S., as well as to boost its R&D and customer success teams. The funding, CEO and cofounder Avi Rabinovich told me, was actually received several months ago but is only being announced now.

He said that Mabaya’s technology, launched last year, is providing the kind of sponsored product placement that Amazon has, but offered through a self-service platform that is available to any major retailer’s desktop or mobile website. Founded in 2013, the company says it is now serving over 450 million sponsored products every month.

A product maker pays Mabaya on a cost-per-click (CPC) basis to feature selected products in search results, home pages or other locations on a retailer’s site. There is only a payment when there is a click, and the revenue is shared between Mabaya and the site. PPC rates, Rabinovich said, are generally 50 cents to $1.

The company claims that, over the last six months, products featured on its platform have seen sales lifts anywhere from 10 percent to 50 percent, with an average of slightly more than 20 percent.

The retailer determines how the sponsored products shown, and whether they are labeled as such. They might be displayed, for instance, in top or bottom rows of search results. Or the products could be shown on the side of a product category page, or in a prime location on a home page.

“For users,” Rabinovich said, “it’s an organic part of shopping, [as] they consider these as featured products.”

The choice of products shown to each visitor can be individualized by the Mabaya platform to a user’s behavioral profile of products searched, viewed or purchased.

So, I asked Rabinovich, why do the retailers need his platform? Isn’t this just another level of personalization, which many retailers are already doing — except that product makers are paying to be at the front of the line?

He said it’s easier for a retailer to contract out this “complex end-to-end process” than to adapt, build or manage it themselves. Additionally, although the data relating to each shopper’s specific path remains with that retailer, Mabaya does glean insights in the anonymous, aggregated data from all of its retailers.

It might find, Rabinovich said, that people who search for iPhones often also search for Samsung Galaxy phones — a pattern it could use to cross-promote the two products across every electronics retailers’ sites.

Mabaya says its technology is currently used by five large e-commerce groups that have about 20 websites in over 10 countries.

These include MercadoLibre, which describes itself as the fifth largest online marketplace dedicated to e-commerce and online auctions, and Shop Direct, one of the 20 largest multi-brand online retailers in the world. Rabinovich said his company is “finalizing” arrangements with two large retailers in the U.S.

Here’s a screenshot from the site of retailer Very, which is owned by the Shop Direct Group: 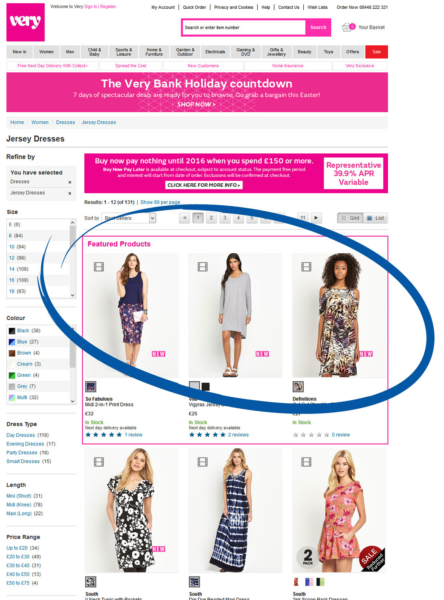 Rabinovich sees his main competitor as the New York City-based HookLogic, which similarly offers PPC product ads in featured site locations, but those ads are shown across a network of retailers instead of being retailer-specific.

By contrast, he said, Mabaya gives “more control to retailers” in how they promote the products on their individual sites.