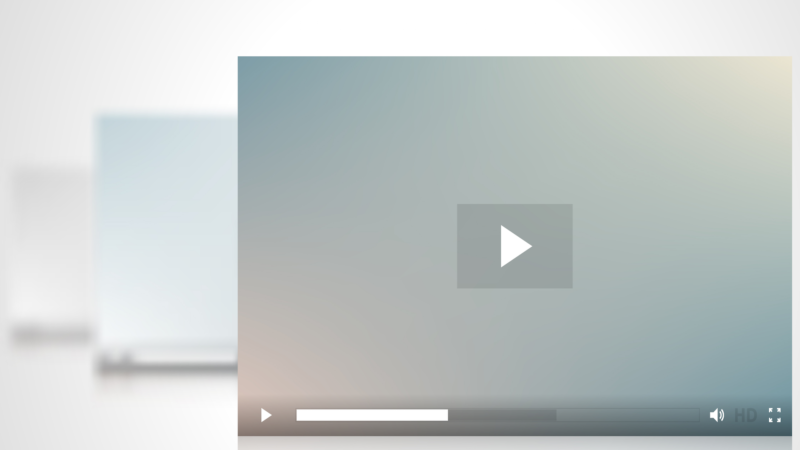 A Miami-based startup is deploying the video playlist as a collaborative engagement tool.

Last month, Videoo issued the release version of its embeddable video player for use in a Star Wars-related campaign for Dolby. In that effort — and similar ones for the seven other brands that have used the company’s technology — the player automatically adds to its playlist any videos on selected social networks that are tagged with a given hashtag, as set up in the Videoo dashboard.

Dolby’s “Be a Part of the Story” collaborative video playlist, for instance, begins with a brief video from the brand asking Star War fans to contribute their favorite “sound moment” or memory from the movie series by posting a video to Instagram, Twitter or Vine with the hashtag, #TheForceAwakens or #SWinDolby. (YouTube, notably, is not yet supported by Videoo.)

The resulting compilation is a mosaic of theme singing, amateur sound effect-making, cats with light sabers (see below), Darth Vader riding a Segway into a wall, and more. 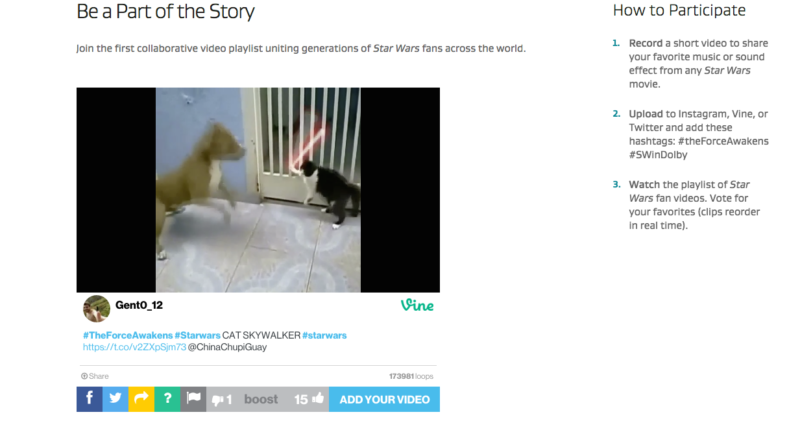 After logging on with a social sign-on, users can also add their own video to the growing playlist. The brand can set up the playlist so that any additions, manual or automatic, need to be pre-approved before posted live — or they can be approved after posting, and removed if necessary. You can’t add someone else’s video.

Users also have the ability to vote any clip up or down. CEO and co-founder Barry Stamos told me the playlist order is generated by machine learning that, in addition to voting, also takes into account such factors as which videos are more frequently skipped, which are shared the most and which ones are watched to completion.

Often, he said, the sponsoring company has its own branded video in the first spot, so as to set up the theme — a position Videoo describes as a “fire starter.” The resulting playlist, then, becomes a curated and evolving stream of user-generated content on the brand-chosen theme.

Founded in late 2014, Videoo initially launched a beta version last February for the Bob Marley “Share1Love” effort, whose theme was “unite the world through acts of love.”

The company reports that users view an average of eight to 15 videos each session, and that the dynamic playlist can generate up to a 20-fold increase in engagement and up to a 400 percent increase in time on site.

Stamos said his company is the “first to unlock the playlist experience,” creating something that is like a longer version of Snapchat Stories, but dynamically re-ordered on a platform-agnostic player.

Competitors, he said, include the JW Player and Brightcove’s player, adding that Videoo’s differentiators include a dynamic playlist, the ability to manually or automatically add a clip, voting, and intelligent re-ordering of the list.

He noted that ad tech is not yet integrated into the Videoo player so that a brand might run, for instance, a pre-roll ad. But the company said such a capability should be ready sometime in the second quarter, with ad revenue shared with the video-supplying social network.