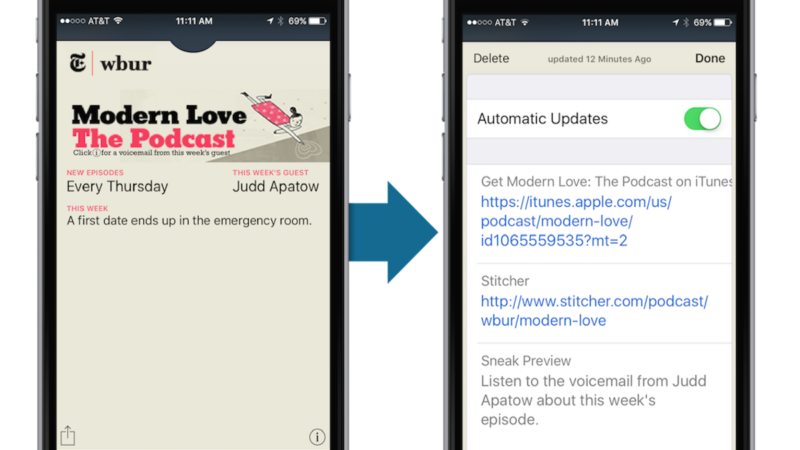 If you haven’t already, you’ll want to add another marketing channel to your growing list.

A recently-launched project involving The New York Times, Boston-based National Public Radio station WBUR, and mobile marketer Urban Airship points the way to using the digital wallet — present in every iPhone or Android phone — as a way to deliver serial content and related links to users.

For the past 11 years, the popular New York Times column “Modern Love” has featured essays submitted by readers about contemporary romance. At the end of January, WBUR began a weekly series of 48 podcasts with such celebrities as director/writer Judd Apatow, actor Jason Alexander, and actress Dakota Fanning reading the essays.

To offer a fairly effortless way for podcast listeners to receive notification about, and a link to, each week’s podcast, WBUR worked with Portland, Oregon-based mobile engagement provider Urban Airship, which has developed a digital wallet manager. At the beginning of February, WBUR and The Times released a digital wallet card with automatic, linked reminders about the podcasts.

WBUR could have used email, an app, or SMS texts to acquire signups, and then to send out weekly notices and links for new podcasts, Urban Airship Senior Director of Product Marketing Bill Schneider pointed out to me.

But a weekly email requires the user to regularly sift through their email, a chore on a smartphone. An app requires you to download, install, and manage yet one more, not to mention app development if it’s unique. A SMS text needs you to give your phone number to The Times/WBUR, and texts are usually peer-to-peer with family or friends. There is some commercial use like coupons, but it has met with mixed reception. Texts are not generally used for content distribution.

Instead, WBUR created a digital wallet card using the Urban Airship Wallet manager. The front of the card contains a brief summary, as well as a recommendation that the user click on the “more info” i-in-a-circle in the lower corner to flip the card over. (See images at top of this page.)

On the backside: links to the podcast on iTunes, or through online radio/podcast service Stitcher, as well as to a voicemail-like reminder audio from the celebrity, and special content, like behind-the-scenes visits to the podcast studio. Of course, links or linked images could also lead to products for sale, other podcasts series, videos, or any other web content, ads, marketing messages, or services.

Every week, the card is automatically updated with links to the newest podcast, which WBUR separately manages via other software. Schneider said that, once the wallet card is created and the wallet manager set up, the cost of sending updates via the manager is “essentially zero.” Every time a new podcast notification is sent to the wallet card, there’s a reminder notification on the home screen of the user’s smartphone. A swipe on the notification takes the user to the wallet card.

To sign up for the wallet card, users went to the New York Times page and entered their email address, after which they received one email with a link to get the wallet card. They opened the email in their phone, clicked on the link, and the card/subscription was set up.

The single email sent out with the link netted a five percent conversion rate in the number of recipients who ended up downloading the wallet pass, Schneider said. That’s about twice the regular email conversion rates, although the email was sent only to people who had previously indicated an interest. Urban Airship reports that about 96 percent of users with the downloaded wallet card have kept it so far.

The wallet card could also have been distributed via other means that do not require you to provide personal info, like a link in a tweet or a Facebook post, or through a scannable QR code.

Schneider said he wasn’t aware of any similar use of a wallet card as a updater and entry point for the delivery of serial content. But the expanded use of digital wallets beyond their current role as the smartphone location for your coupons, loyalty cards, boarding passes, and credit cards was predicted in a report released a year ago from Forrester Research.

That report, “The Future of Mobile Wallets Lies Beyond Payments,” forecast that, “in the next five years, mobile wallets will become marketing platforms.”

“Third-party players like Apple or PayPal,” Forrester says, “are best placed to emerge from the mobile wallet wars and morph [wallets] into rich marketing platforms.”