Creating a mobile app is only part of the battle. Sometimes, marketers and others need to add features that will bring attention to under-used features or increase in-app sales.

To facilitate the addition of these features to existing apps, Israel-based startup Insert is today exiting from its stealth mode and launching its first product, the cloud-based Codeless Mobile Engagement Platform. Insert’s founders previously started the mobile app platform Worklight, which was acquired by IBM in 2012 and is now called MobileFirst.

CEO and co-founder Shahar Kaminitz told me by phone that any of the 15 customizable features available at launch can be configured, customized, and deployed in about half an hour or so. He said more than three dozen other features are in development, as is the ability for marketers to codelessly build features from scratch.

The current inventory of features focuses on user guidance and communication, acquisition, and conversion. They include surveys, an App Walkthrough on-boarding guide for users, an ability to highlight under-used functions like in-app registering, coupons, a reminder about an abandoned shopping cart, modification of existing text or images in the app, and more.

The template features can be customized visually through the browser-based wizard, which also enables the creation of triggers and other activation contexts. The look-and-feel can be edited down to the pixel level by color or font so as to match the app’s, and the feature can be inserted exactly where desired on a particular app screen, since the app’s screens are laid out in the platform. Marketers can check the features at any point in a preview version of the app, on their own phones.

The platform works with existing iOS and Android apps, native or hybrid, although HTML5 apps are not currently supported. 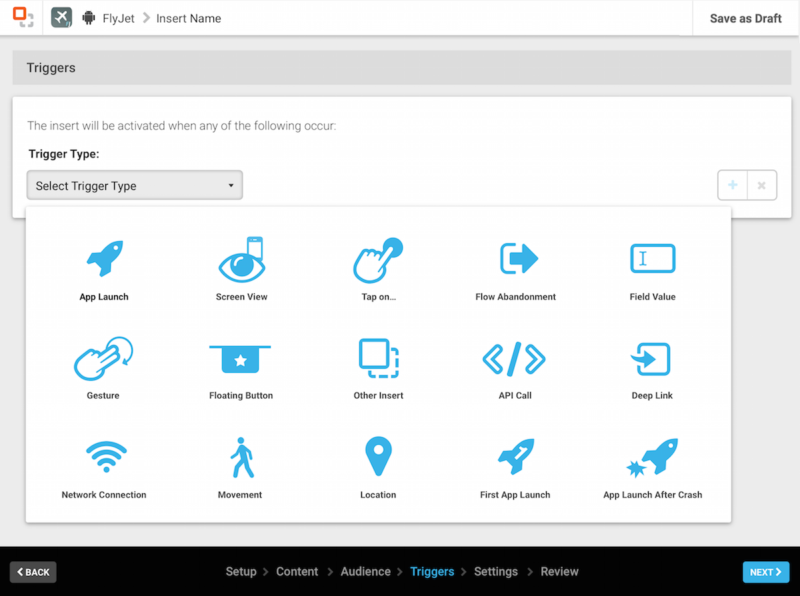 A developer is still required for the initial integration between the platform and an existing app, Kaminitz said, but he noted it’s similar to modifying an app’s external library and doesn’t require additional coding. Once integrated with the platform, an app in an app store will automatically update with future features any downloads of that app version or later.

Kaminitz acknowledged that some mobile marketing automation platforms can introduce new features to existing apps, but he pointed out they generally require coding. A variety of platforms allow businesses, especially smaller businesses, to create and deploy apps without coding, but they are not designed to codelessly add features to any existing app.

Kaminitz noted that Insert is after bigger brands, typically ones with a half million or more app users. He said that he is not aware of other platforms that allow modification of existing apps without coding.

The typical use case, he said, is a bank app that lets users deposit money or pay bills, but those features are being ignored as many users simply check their bank balance. A marketer at the bank may want to increase engagement with those functions by highlighting some buttons, adding a user guide, getting feedback on why those functions are not being used, or other modifications.