Does Google stand a chance against Facebook in mobile display? 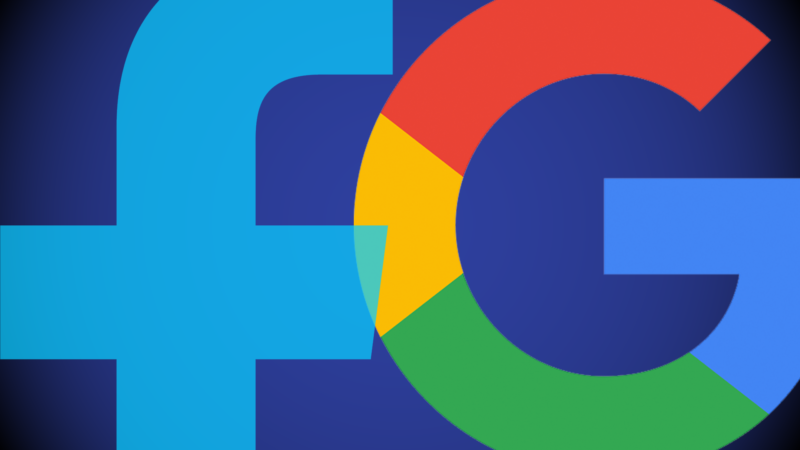 It’s no secret Facebook has been steadily building up its ad technology — directly challenging Google. These moves, coupled with the introduction of native ad formats that appear throughout Facebook’s mobile newsfeeds have propelled it past Google to become the leading seller of display advertising worldwide.

The speed at which Facebook’s mobile ad offerings took off surprised analysts. In 2013, eMarketer’s projections had Google continuing to lead display advertising in the US through 2015. The firm’s updated estimates in 2015 paint a very different picture, with Facebook having been the leader since 2013, with share growing through 2017, in contrast to Google’s shrinking market share. 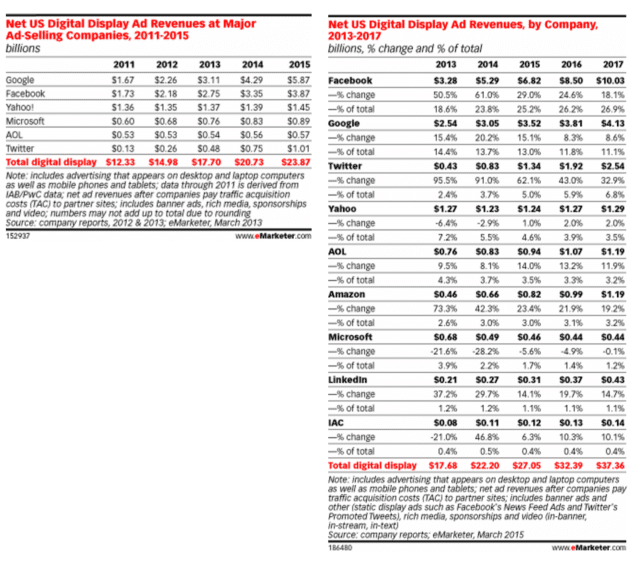 Most estimates peg Facebook as the runaway leader in display for the foreseeable future. How did Facebook get here and does Google stand a chance of catching up?

August 2012 was a pivotal one for Facebook gaining a strong foothold in mobile display advertising on two fronts. It was the month the social network first announced app install ads would be coming later that fall. On the company’s Q1 2013 earnings call, CEO Mark Zuckerberg noted Facebook was already starting to see real revenue from those app install ads. Emarketer estimates that spending on mobile app install ads increased by nearly 4x between 2013 and 2015 to become a $3 billion market in the US alone.

August 2012 was also the month Facebook made an inspired move with the introduction of Custom Audiences, anonymously matching advertisers’’ first party data like phone numbers and emails to users’ Facebook accounts for ad targeting. It would be hard to understate the impact of Custom Audiences’ on digital advertising.

Facebook quickly expanded Custom Audiences’ capabilities in 2013, first with the ability to expand targeting to Lookalike audiences and then with the addition of consumer data from third-party vendors such as Datalogix, Epsilon, Axciom and BlueKai. Google only recently countered Custom Audiences and Lookalike Audiences with its version, called Customer Match, in the fall of 2015.

Then Facebook began to take on Google’s AdSense directly by distributing ads beyond its own walls. At the end of April 2014, the company launched Facebook Audience Network (FAN) — initially an ad network for in-app native display and video ads that recently extended to mobile web advertising. Finally came the launch of Atlas, the ad server that leverages the Facebook ID for cross-channel attribution – including measuring online impact on offline sales — to challenge DoubleClick in 2014.

Facebook said FAN hit a $1 billion annual run rate in Q4 2015. In March, the company announced partnerships with third-party ad mediation platforms (used by app publishers to get the most revenue for their ad supply from multiple ad networks), including Twitter’s MoPub, Fyber and Opera Mediaworks. The deals mean publishers using those platforms now have access to FAN ad formats and demand from Facebook’s three million advertisers.

Facebook also acquired video ad network, LiveRail in July, 2014. LiveRail’s focus is now on powering private marketplaces for mobile publishers such as Hulu and A+E Networks. While most programmatic inventory is sold on open exchanges, private marketplaces are becoming popular with publishers and advertisers that want more quality control.

And of course there is Instagram. Facebook doesn’t report Instagram’s ad revenue separately, but the company says it now has over 200,000 active advertisers – more than Twitter’s 130,000 – thanks in large part to the fact that extending advertising campaigns from Facebook to Instagram is as easy as checking a box in Facebook Ads Manager.

Signs that Google may be strengthening?

For its part, Google has struggled to transition its dominance in desktop display to mobile. However, there are signs the company may be gaining some traction. Ruth Porat, CFO of Google parent company Alphabet, on the company’s fourth-quarter 2015 earnings call, noted the “ongoing momentum in YouTube and programmatic advertising”. (Programmatic includes the company’s display business from DoubleClick AdExchange and AdSense.)

Google CEO, Sundar Pichai, added on that same call, “Programmatic video impressions doubled compared to the holiday season last year. And in the week leading up to Black Friday, more than 60% of programmatic impressions came from mobile devices.”

The fourth-quarter 2015 reports from Adobe, Merkle and IgnitionOne also point to a stronger outlook for Google during the hyper-competitive holiday shopping period.

Among Merkle’s advertiser base running ads on both networks in Q4, spending on the Google Display Network was two-thirds greater than on Facebook. CPC growth on Facebook stalled toward the end of 2015 and declined in Q4, causing ad spend growth to slow, Merkle reported. The agency noted that Facebook accounts for a smaller percentage of total ad investment than Google among retail advertisers, yet for gaming and movie preview campaigns, Facebook spend is relatively high.

After IgnitionOne reported strong growth by Facebook in Q3, in Q4 the company found that Google outpaced Facebook in spend growth among advertisers on the campaign management platform between Thanksgiving and end of the year. Google display ad spend (including AdX) rose 37 percent and conversions rose 34 percent year-over-year. Facebook ad spend rose 22 percent and conversions increased by 17 percent year-over-year. 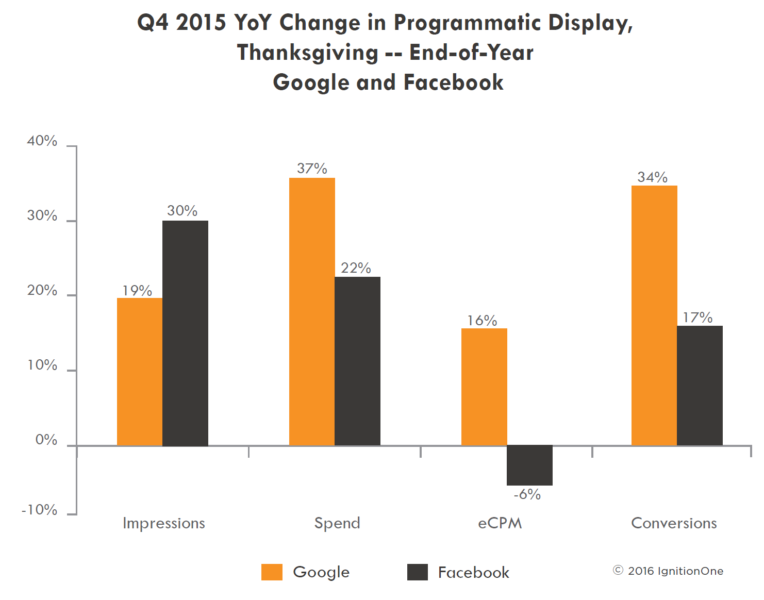 Beginning last year, Google also began pointing attention to YouTube’s ad growth – and said that the lagging CPCs the company has reported for years now has been caused by the rapid acceleration of cheaper ad clicks on YouTube. In its analysis, Credit Suisse estimated that YouTube and Google Play accounted for 15 percent of Google ad revenues in 2015 and projects the revenue contribution from both YouTube and Google Play to rise to 24 percent by 2020.

Credit Suisse says it believes YouTube remains vastly under-monetized with ad-loads of between 10 to 20 percent and that “Facebook’s video ad offering is more likely to help migrate brand advertiser dollars online than serve as a competitive threat to YouTube”. The analysts estimate that YouTube generated $6 billion in 2015 and will continue to grow. 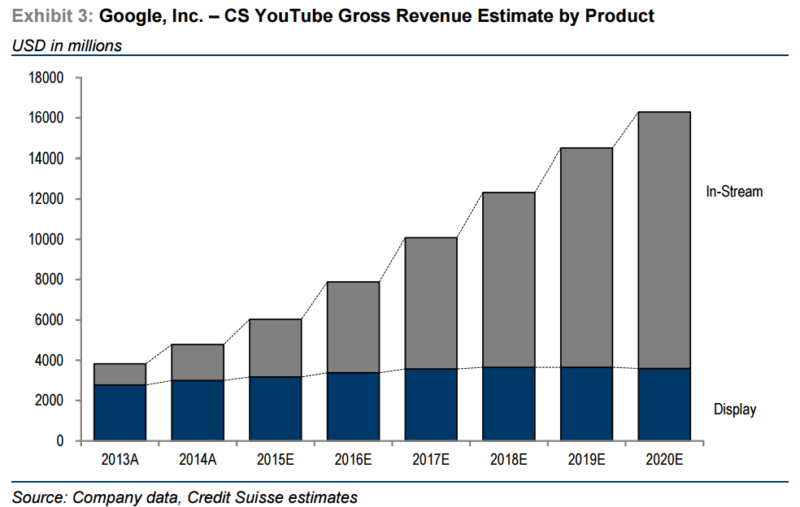 Yet another front in which the two companies are going head to head is in mobile content (and ad) delivery. Google answered Facebook’s Instant Articles with the Accelerated Mobile Pages Project (AMP). AMP pages began serving in Google Search in February. More than 20 ad tech partners have signed on to support mobile display advertising in AMP-enabled articles, including AOL, AdSense, DoubelClick, Kargo, Moat, OpenX and OutBrain.

Facebook Instant Articles will open up to all publishers on April 12, 2016. Last week the company announced support for video ads in Instant Articles. Publishers can fulfill their inventory themselves and keeping 100 percent of the revenue or have Facebook fill it for a 30 percent cut.

The revenue impact from these efforts may not be seen for several quarters. With Q1 having just wrapped up, we’ll see if Google was able to hold on to any of the display momentum of Q4 2015 when agency reports start coming out in the next few weeks.