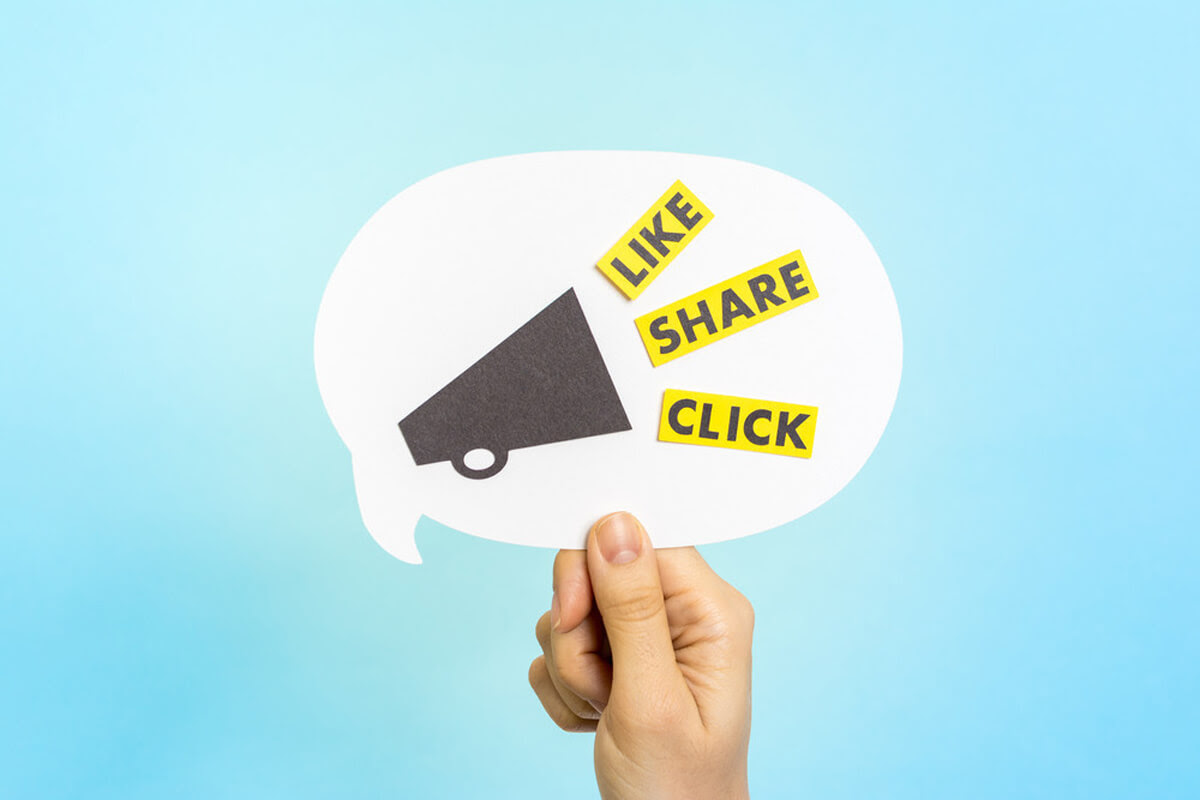 Whether it’s news about a “Gilmore Girls” reunion or proof that cats are jerks, BuzzFeed is a creator and curator extraordinaire, and it’s often viewed as the gold standard in viral content. Getting your content picked up by BuzzFeed can lead to millions of views and social shares, but how do they do it?

It turns out success on BuzzFeed requires more than kitten GIFs paired with minimal text. My team at Fractl used BuzzSumo to analyze the top 100 most-shared content on BuzzFeed between March 2015 and March 2016. After examining the articles based on content length, image type and category, we were able to bust some common myths and assumptions about this content kingmaker.

Make no mistake, short content reigns supreme on BuzzFeed. Of the top 100 articles, almost half were 300 words or less. More often than not, these were memes, GIFs or videos that showed more than they told through word count. This type of content is ideal for readers looking for simple, skimmable entertainment. 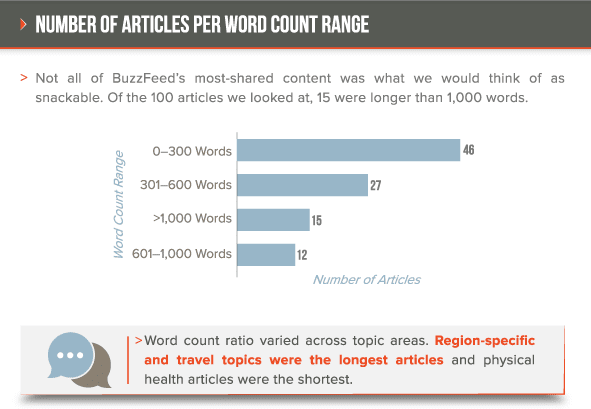 However, 27 percent of BuzzFeed’s most popular content exceeded 600 words, and 15 percent exceeded 1,000 words. Some of the most-shared articles even reached the 2,000- and 5,000-word marks but still experienced significant viral success. 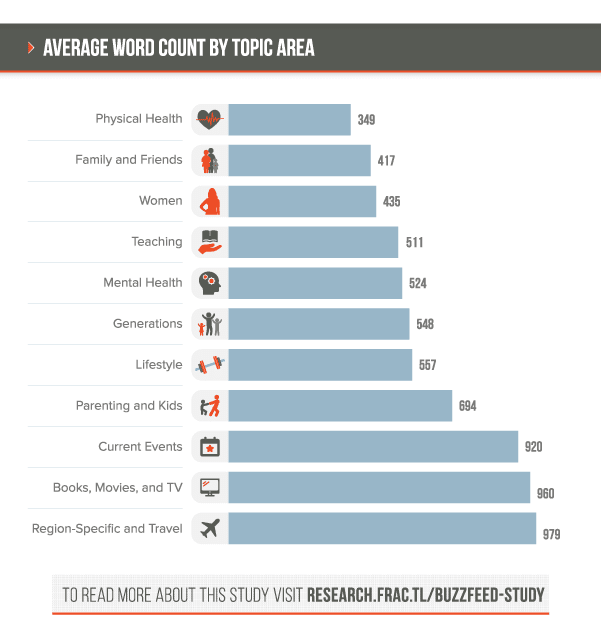 An article titled “X Amazing Places to Visit Before You’re 30” could definitely go viral, but from what we’ve seen in our data, you’re much better off creating “X Best Places to Eat in Austin.”

Not only does the article become stickier and retain the interest of readers visiting Austin, but the regional pride (or ego-bait) makes locals in Austin share because their favorite hot spots are listed.

Audiences also love speculating about their favorite characters, from the Tanner family in “Fuller House” to the more dysfunctional parental relationships of Kylo Ren. Fan theories and predictions abound, which creates a heated debate in the comments and garners hundreds of shares.

Current events articles were the third-lengthiest type of BuzzFeed content, with an average of 920 words. These articles go beyond CNN soundbites and take a deep dive into their topics. Who are the major players in Syria? How do we pick the next Supreme Court justice? BuzzFeed is offering explanations that most people can’t find on traditional news channels, and audiences love it.

BuzzFeed shows us that length doesn’t always matter, as long as the content is captivating enough to keep readers around.

When most people think of BuzzFeed, they imagine a line or two of text immediately followed by a “Mean Girls” GIF. While that type of article is certainly popular, minding your text-to-image ratio can actually improve your likelihood of success.

When we sorted the top 100 articles by category, some had a lower image saturation than others. 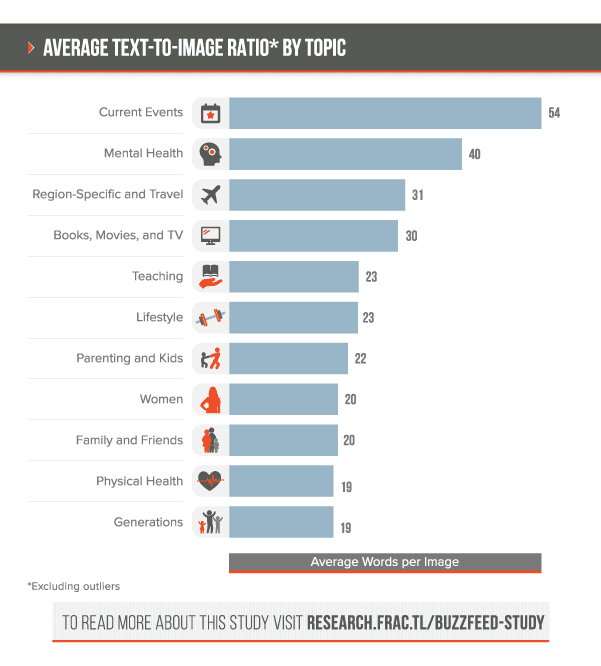 Consider your audience when you’re creating articles around specific topics. It’s definitely appropriate to insert a GIF of Joe Biden rolling his eyes when you’re writing about the presidential nomination process, as long as it follows a few paragraphs explaining why Bernie Sanders and Hillary Clinton are still battling before the Democratic Convention.

In fact, current events averaged 54 words per image, proving that the audience is there to learn more rather than react.

Articles about mental health also had one of the highest text-per-image ratios, with 40 words per image. Your audience is going to be captivated by the story of a boy with autism, and they don’t necessarily need several visuals to stay engaged.

Instead of focusing on the volume of images and words, add the following traits into your content.

A news article that explains something does well, but an article with a highly emotional hook does even better. Combining these two elements can draw in readers and keep them interested until the end. This article about children in Syria offered a heartbreaking look at the refugee crisis.

There’s always a place for GIFs in BuzzFeed articles, but the best ones combine these GIFs with helpful information and advice. One popular article on BuzzFeed titled “23 Things to Do to Improve Your Mental Health in 2016” did exactly that.

Ask: What will my audience learn from this content? Will they leave better informed by what we offer? If the answer is no, then spend less time on the images and more time providing value.

BuzzFeed thrives when its contributors post articles and videos that the audience has never seen before. What can you offer that your readers won’t find anywhere else?

The headline of an extremely popular BuzzFeed post written in Portuguese translated to “We Showed 10 Brazilian Habits to Gringos and They Were Shocked.” Not only is it an unusual topic, but the article delivered on the promise of the compelling headline.

Readers don’t visit BuzzFeed for fluff — they visit for engaging content that they can’t find elsewhere. If your content meets the above criteria, then you shouldn’t have to worry about word count or finding the right images.